A big thank you to all the children, parents, carers and staff for all their help in making Fairtrade Fortnight a great success!

We have been doing lots of fantastic work in class and in our assemblies – and even at home!

Here is what some of the classes have been up to. . .

A big well done to all the children who entered our Fairtrade Poster competition. We had over 85 FANTASTIC entries. Here are the winners and runners up. . . 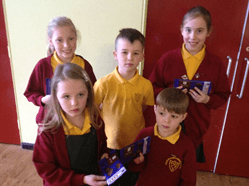 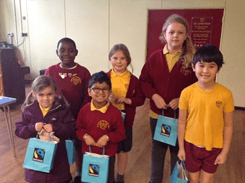 Year 1 have been making their own gingerbread men with Fairtrade ingredients during school on Tuesday 22nd January 2019, which they could take home to show their families. It was very successful and the children really enjoyed it.

Year 6 children held a coffee morning to help raise money for charity on Thursday 27th September 2018, cakes were made and bought by children/parents/staff with some containing fairtrade ingredients, including homemade fairtrade brownies. Thank you for everyone's support.

As part of Fairtrade fortnight 2016, the children enjoyed a Fairtrade snack, listened to a Fairtrade assembly, learnt about Fairtrade in class and designed a Fairtrade poster. We also had an article in the school newspaper, where the winning poster also appeared.

Quinton Church Primary School has been supporting Fairtrade awareness and advocacy since 2009 and achieved the FAIRACHIEVER AWARD in 2013, the highest Fairtrade award a school can attain. We were the first primary school in Birmingham to achieve this and we are still the only one to have done so! This is through the hard work and fun ideas of the Fairtrade Steering Group which consists of 10 children from years 3-6, a couple of keen adult helpers and the support of Governors, PTFA, Quest Group, church and teaching staff alike- we couldn't have done it without you! THANKYOU!

Since our inception we have led Fairtrade treasure hunts, Christmas Quizzes, assemblies and a 'whole school Fairtrade Logo' was mapped out in the school hall using ourselves as the 'paint'. Tom Palmer, the Football and Fairtrade Author, also visited the  school (financed by the PTFA) to tell us about Ghana and the Cocoa Farmers. We have raised money through various events including Fairtrade Chocolate Fountains and Fairtrade Football Penalty Shoot Outs at the School Fairs and Hot Chocolate Mornings and Cake Sales at School.